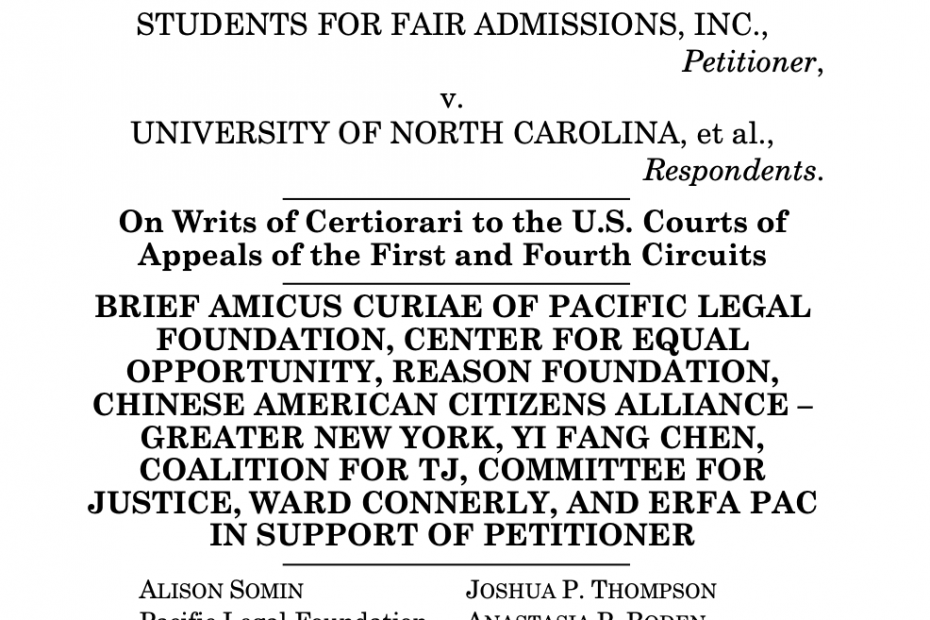 Today we, the “Equal Rights for All” PAC, together with other organizations and individuals filed a Brief Amicus Curiae in support of Petitioner Students for Fair Admissions.

Below is an excerpt, to view the full article, please download this PDF or Supreme Court Copy

America was built on a principle. “All men are created equal”—each endowed with “unalienable Rights” such as “Life, Liberty, and the pursuit of Happiness.” Decl. of Independence. The Equal Protection Clause of the Fourteenth Amendment and Title VI of the Civil Rights Act safeguard this important principle. They ensure not equality of outcomes, but equality of liberty. As Senator Jacob Howard from Michigan, in a speech introducing the Fourteenth Amendment to the United States Senate in 1866 put it, the Amendment “establishes equality before the law, and it gives to the humblest, the poorest, the most despised of the race the same rights and the same protection before the law as it gives to the most powerful, the most wealthy, or the most haughty.” CONG. GLOBE, 39th Cong., 1st Sess. 2766 (1866) (statement of Sen. Howard). Equal protection of the laws is an individual right. It stands in stark contrast to equality of outcomes among groups— which has no basis in the Constitution. As the late Justice Scalia proclaimed, “individuals who have been wronged by unlawful racial discrimination should be made whole; but under our Constitution there can be no such thing as either a creditor or a debtor race.” Adarand Constructors, 515 U.S. at 239 (Scalia, J., concurring). “That concept is alien to the Constitution’s focus upon the individual and its rejection of dispositions based on race.” Id. (cleaned up). “In the eyes of government, we are just one race here. It is American.” Id. In other words, we are all individuals who share a universal bond. By virtue of our humanity, we are entitled to pursue happiness free from arbitrary or onerous government encumbrances.

This case involves a cornerstone of opportunity: Education. Harvard University is regarded by many as the best university in the world. The school has produced several U.S. presidents, several corporate CEOs, and countless judges—including current and former justices of the Supreme Court of the United States. Moreover, Harvard touts among its alumni nearly two hundred billionaires, dozens of Nobel laureates, and over three hundred Rhodes Scholars.

The University of North Carolina is among the best public universities in the world. Well-known Tar Heels include a president (James Polk), dozens of business leaders, and several professional athletes including, of course, Michael Jordan.

Both Harvard and UNC use racial preferences in admissions. Harvard admissions officers use summaries containing demographic information throughout the admissions process. Harvard Pet. App. 24. These “one-pagers” contain racial statistics and are “periodically shared with the full admissions committee” in part “to ensure that there is not a dramatic drop-off in applicants with certain characteristics—including race—from year to year.” Id. Similarly, every applicant to UNC must complete a common application, UNC Pet. App. 167, which allows the applicant to identify as a member of a racial or ethnic group, such as white, black, Hispanic, or Asian. UNC’s admissions policy favors members of underrepresented minority groups, which is defined as any group “whose percentage enrollment within the undergraduate student body is lower than their percentage within the general population in North Carolina.” UNC Pet. App. 15 n.7. For more than three decades, UNC has considered “students identifying themselves as African American or [B]lack; American Indian or Alaska Native; or Hispanic, Latino, or Latina” as underrepresented minorities. Id.; see also UNC Pet. App. 4 n.2 (referring to students who self- identify as members of those groups as “students of color”).

This Court should put an end to the race-based component of the universities’ admissions policies for three reasons. First, racial balancing is pernicious. It makes no difference whether such balancing comes in the form of a candid acknowledgement on the part of the universities that they are engaging in such practices or are instead implemented under the guise of pursuing diversity. Either way, the practice is antithetical to the principle of equality before the law. Second, as many of the amici have experienced first- hand, the pernicious practice of racial balancing has spread to K-12 education, where it is now depriving children of spots at some of the best public schools in the nation solely because of their race. Third, the constitutional path toward advancing opportunity for all is not creating racial entitlements, but tearing down obstacles to opportunity, such as unnecessary and burdensome occupational licensing laws, the public-school monopoly, and unlawful housing regulations. Thus, this Court should enhance equality and opportunity for all Americans by strongly protecting all of their civil rights, including the right to equality before the law, the right to earn a living, and the right to property.

And our major arguments are listed as follows:

I. Racial Balancing Is Inconsistent with the Principle of Equality Before the Law

II. Racial Balancing Under the Guise of Diversity Has Infected K-12 Education, Where It Denies Students Opportunities Because of Their Race

III. This Court Should Advance Equality and Opportunity By Strongly Enforcing Constitutional Rights